Hear From Our Members


History in the Making: Be a Part of It

Located in the historic, walking friendly neighborhood of Kensington, our church is a beacon for those who are new to the city as well as a home to those who have worshipped with us for generations. Be a part of the history we are making!

In 1910, a new San Diego subdivision development was formed — Kensington Park. As the first few homes were built and occupied, the residents recognized the need for a Protestant church and sought help from the Southern California Conference of the Congregational Church. On March 28, 1929, the conference purchased the land we occupy today.

The first minister, the Rev. Frederick Sanders, began services in September 1929. The church almost closed during the Depression, but in 1940 a new cycle of growth began. Thanks to Rev. Ray Anger, the young, ambitious new minister, the church grew significantly.

A Sanctuary Created & Recycled for Glory

By 1946, Kensington Community Church had grown enough to warrant a new sanctuary. With materials scarce after the war, the congregation bid $7,500 on a chapel from Camp Callan (where UCSD is now located). The chapel was taken apart piece by piece, numbered and tied together, and brought into Kensington by truck. A new front was designed by Rev. Lester Bond, the old steeple removed and a 50-foot tower added. On January 4, 1947, a 21-chime carillon was dedicated. On January 26, 1947, the “New Sanctuary” was dedicated at the eleven o’clock service.

In 1954, Rev. Bond decided that stained glass picture windows would greatly enhance the church sanctuary. A large window, the subject determined to be “The Good Shepherd,” would be made and installed in the back of the sanctuary. Two art glass studios were approached and the American Art Glass studio was selected after a picture submitted by their artist, Claus H. Wittenberg, met with unanimous approval. This window was known then as the “Congregation’s Window,” and was dedicated on September 25, 1955. 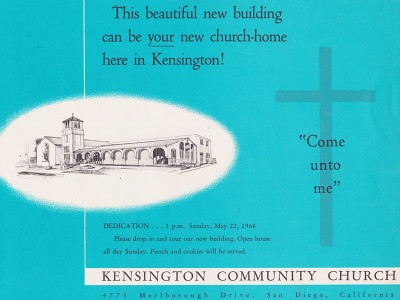 In 1966, the church rededicated its Sunday school building and announced the celebration to the community with the mailer shown here.

In recent years, the church was blessed with a series of gifts from the estate of Bertha Lander, a former Talmadge resident and church member. Her donations, ultimately totaling more than $1.3 million, were the largest in the church’s history. Together with generous support from the congregation, her gifts allowed the church to embark on a construction campaign that included remodeling of the church’s fellowship hall, now called Lander Hall; extensive improvements to the patio and façade; and a newly remodeled sanctuary dedicated in September 2011.

As part of the sanctuary renovation, the church restored its large, stained glass Good Shepherd window overlooking Marlborough Drive. The pews feature more spaces for people using wheelchairs and walkers, and there is now a ramp to get to the raised chancel area. The church also tried to live out its commitment to stewardship of the planet with eco-friendly products and reuse of its materials. A projection screen, audio booth and audio/video upgrades will enable the congregation and guests to more readily employ digital media during services, concerts and presentations.

See a timeline of our rich history and some of our milestones.

Our Traditions as Living History

More than our buildings, our energy and our love of tradition brings history to life: